Central Mongolia's expansive serenity mixes with a variety of landscapes, including sand dunes and rocky mountains.
The great attraction of Central Mongolia tourism is the nature that is untouched by humans and the "nomads" who live there.World heritage, endless prairie, mysterious Gobi desert, natural hot springs, crystal clear lakes and rivers. And it is a unique nomadic lifestyle and culture that can only be seen in Mongolia. Visiting the historic sites is also one of the interesting things.If you have any questions or quotations about Central Mongolia, please feel free to contact us.

The Orkhon Valley is a valley extending on both banks of the Orkhon River in central Mongolia, about 360 km west of Ulaanbaatar, the capital city of Mongolia. The valley's cultural landscape has been registered as a UNESCO World Heritage Site by exemplifying the nomadic heritage that has been cultivated for over 2000 years.
For centuries, the Orkhon Valley has been considered the seat of the King of Steps.The name that appears in history is the "Orkhon inscription" that was set up in this valley by Bilge Khaan of the 8th century.The mountains that make up the valley were considered sacred as the axis of the world in worship of Tengri, but Mount Utukken was considered special.In the Orkhon Valley there are the Orkhon inscription, the remains of Khar Balgas, the remains of Karakorum, the capital of Genghis Khan, and the Erdene Zuu monastery.

In Central Mongolia, there are many archaeological sites and historic sites in the cultural landscape area called Orkhon Valley, and the most famous one is Karakorum.When the nomads of Mongolian and Turkish descent who lived in Mongolia for a long time were founded, the city was selected as the Orkhon River basin. Genghis Khan has also ordered the establishment of the Mongolian capital city there. The city of Karakorum was built in 1235 under the order of Genghis Khan and is famous for its temporary center of the world. One of the world heritage sites of Mongolia is, Erdene Zuu ​​temple of the Karakorum ruins. This ruins, which suddenly appears in the prairie, has a total of 108 high-impact white pagodas and outer walls that surround the Buddhist temple, making it a temple complex with a long history in Mongolia. A short walk from the archeological site, is a joint project of the Mongolian Cabinet and JICA, and the "Karakorum History Museum" has been constructed by Japan's ODA.

Erdene Zuu Temple was the first Buddhist temple built in 1586 by Abtai Sain Khan. It has been protected as a National Special Protection Site since 1944.The four "Erdene Zuu" walls are also 420 meters long, with 25 stalls on each side and two squares on each side, for a total of 108 stupas. Currently working as a museum. In 1996, the United Nations Organization for Educational Science and Culture declared the ruins of "Erdene Zuu" and the city of Karakorum as a World Heritage Site.Customers can visit "Ulaan Tsutgalan Waterfall", "Mogoit 45-70 degree hot spring", "Elsen Tasarhai", "Uvgun Temple", etc. while looking at Karakorum.

Khugnu Khan Mountain has been a National Special Protected Area since 1997. Khugnu Khan mountain in Jargalant village in Bulgan province is 1962 meters above sea level.There are deers, wild boars, wolves, roe deer, birch and larch on Mount Khugnu Khan. Located 280 km west of Ulaanbaatar, near Burd, this camp is in a very quiet environment with nothing but the blue sky, white clouds and nothing but Mt. Khugunu Khan behind it. A true nomad homestay is here. Horseback riding is also possible in the prairie. There are two Buddhist temples on Mount Khugnu Khan.

One of the highlights of the world heritage "Cultural heritage of the Orkhon Valley" is the Khushuu Tsaidam Museum, about 40 km northeast of Karakorum, on the east bank of the Orkhon River, and the mausoleum of Bilge Khan and Kultugen, the second kingdom of the 8th century. It was built at the midpoint where the monument was run, and exhibits materials centering on the actual Bilge Khan inscriptions, also known as Orkhon inscriptions, and Kyoltugen inscriptions.The museum was built based on a joint excavation survey between Mongolia and Turkey in 2000-2003. In the museum, the real thing of the Kyoltugen monument and the monument of his brother Bilge Khan are exhibited.

About 2-3 hours drive west from Burd, the Orkhon River pours into Lake Baikal in a quiet location. Among them, "Orkhon Waterfall" is 10m wide and 24m high, which is small to the eyes of the tourists, but it is a rare scenery here in the steppe. The Orkhon Waterfall is located upstream of the Orkhon River, which flows from the Arkhangai Mountains in Uvurkhangai Province.

Tuvkhun Temple is a temple that is registered as a World Cultural Heritage site on the mountain top of Tovkhon Silet Mountain, about 20 km northeast of Batulziit Village, Arkhangai Province, Mongolia. Tovkhon Monastery was first established in 1648, by the 14-year-old Zanabazar, He determined that the location on the Shireet Ulaan Uul mountain, overlooking a hill at 2,600 meters above sea-level, was an auspicious location. The first physical structures were built upon his return from studying in Tibet in 1653. Zanabazar, who was a gifted sculptor, painter, and musician, used the monastery, originally called Bayasgalant Aglag Oron (Happy Secluded Place), as his personal retreat over the course of 30 years. While there he created many of his most famous works. It was also where he developed the soyombo script.

Tsenkher natural hot spa, it has been selected as one of the 100 hot springs in the world.
The source of the hot spring is 86 degrees Celsius, and it is a natural grassland hot spring that has abundant hot water flowing directly from it. If you like hot springs, this is one of the tourist destinations in Central Mongolia that you should keep in mind. You can observe the stars at night while taking an open-air bath. A place suitable for horseback riding and visiting nomads.You can also observe alpine plants in the Hangai Mountains and study organisms.
It takes 8 hours by car from Ulaanbaatar.The accommodation is a collection of tourist gers. It is a perfect place to relax and enjoy the hot springs while gazing at the beautiful forest mountains and prairie of Mongolia.

It is approximately 120 kilometers from the Tsenkher Hot Springs to Lake Ugii. Located in Ugii Village, Arkhangai Province. Lake Ugii is home to 170 species of birds and about 20 species of fish.

Typical lakes in Arkhangai, which have abundant water sources, include Ugii Lake and Terkhin tsagaan Lake. Both lakes, which are designated by the Ramsar Convention to protect important waterbird habitats, are home to many migratory birds, such as swans, red-crowned cranes, and red-crowned cranes each year.One of the largest lakes in Mongolia. There is a ger camp around the lake, which is convenient for lodging and meals. Bird watching, hiking and fishing are available.

The Lake Terkhine-Tsagaan (White Lake) is located in the Lake Terkhine-Tsagaan National Park in Arkhangai Province, 590 km west of Ulaanbaatar. The lake of Terkhin-Tsagaan is a lake formed by lava that flows from the Khangai Mountains and is designated as a national protected area along with the surrounding volcanoes. Known as a scenic place, it is one of the most popular tourist attractions both inside and outside Mongolia.In addition to the crater of an extinct volcano, there is a stone statue called " Stone Man". The magma from the eruption of the Horgo volcano solidified, creating the beautiful lake of Terkhiin-Tsagaan at 2060 meters above sea level.The lake is 16 kilometers wide, 20 kilometers long and 4-10 meters deep.The Terkhiin-Tsagaan Lake National Park is home to the Khorgo Volcano, where you can admire or hike the 2240-meter-high dead volcano.

Khorgiin Togo" (Hidden Pot) Death Volcano in central Mongolia, located on the north side of the Soman River, near the village of Tariyat in the Arkhangay province, where the lava of the volcano flowed into the lake thousands of years ago. The crater with a diameter of 200 meters and a depth of 100 meters is seen, and a lava field spreads around it. This extinct volcano was designated as a nature reserve in 1965. The area around the volcano is an area of ​​interesting landscape that has been hardened by lava bubbles. 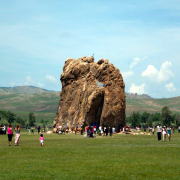 The name "Taikhar" comes from the Mongolian mythology.According to mythology, this rock is not formed by itself.This rock stands 22 km west of Tsetserleg, the capital of the prefecture, along the main road, in the middle of an empty grassland.There is no similar thing around the rock and it is immediately visible from the main road.The inscription that dates back to the dating era is drawn on the Taikhar Rock.
Taikhar Rock.The height is about 26m.Since about 6000, symbols and animals have been engraved.The letters are also engraved with Tibetan, Old Mongolian, Qitan, Uyghur, Manchu, Kanji, and Runes, and even historically refer to historical figures from the Gaol period.

Undur Shireet is a campsite located 200km southwest of Ulaanbaatar, halfway between Karakorum and on the banks of the Tuul River, which runs through the prairie.
The beauty is clear from the fact that it was selected as the filming location for Makoto Shiina's movie "White Horse" and the Kubota commercial.This campsite is a campsite with special permission from Undur Shireet Village, so there is no other campsite around.Since there are no other facilities, lights of the town, and electric wires, it is also ideal for seeing a sky full of stars!
Hot Air Balloon Flight Enjoy the impressive 360-degree panorama as the wind blows through the Mongolian steppe.Horseback riding experience is also possible.

The surrounding area is a grassland as far as the eye can see, and it is a very wide and quiet place. It's close to the capital city of Ulaanbaatar, but you don't feel it at all.It is located south of Ulaanbaatar, in the Bogd Khan National Park, about 45 kilometers away from the airport and in the opposite direction from Ulaanbaatar."30 minutes by car"
The stars in the night sky are as wonderful as I've ever experienced.There is no light near the ger, so there are stars all over the plastered sky.You can hike through tightly protected national parks and explore the remains of Manzushir Temple.

A golden opportunity to ride a horse on the Mongolian steppe and travel by air balloon in the blue sky of Mongolia.

It is the best tour in Mongolia. Overnight in the prairie Undurshireet · World heritage sightseeing · Tsenkher hot spring· 2 nights horseback riding in the beautiful nature Burd,,

Let's assemble the ger with everyone together while enjoying horse trekking. We ride 20 to 30 kilometers by horse riding a day. Even beginners can join.

Mongolian Ito (Taimen / Amour Ito) is one of five species of its living in the world and is distributed in the north-eastern part of the Eurasian Continent.

Local staff and local guide will accompany you. There is a license to drive a motorcycle in Mongolia. Bike tour in the Hot Spring,air Balloon, Karakorum Ruins, Lake Terkhiin Tsagaan Nuur , Lake Ugii, and Burd Sand Dunes in the Undurshireet steppe.