The Mongolian diet is mainly meat and dairy products, including rice and noodles. Most of the carnivorous foods in Mongolia are cows and mutton, and dairy products are made from cow, sheep, horse, goat, and camel milk. As typified by Mongolian rock salt, the seasoning is only salt, and it is the real pleasure of Mongolian cuisine to taste the ingredients themselves. Depending on the season, I used to eat dairy products in the summer and meat in the winter, but now I can get various ingredients at the supermarket. Mongolian food, throughout rural Mongolia, is by far the world’s most less genetically modified as well as less chemically influenced foods on planet earth – much like remote Alaskan Tribes. All livestock is 100% free to graze incredible pasture lands with absolutely zero foreign substances introduced into their diets – Mongols are about being 100% Organic and beyond a healthy desire for meats they prefer to grow and eat their own local vegetables as well. Over the past decade or two, Mongols have started to invest in nationwide greenhouses to grow everything from cucumbers, lettuces, potatoes, cabbages, turnips, onions, carrots, etc., etc., etc., on their own instead of relying on lesser quality imports from neighboring countries.

UUTS OR WHOLE RUMP OF A SHEEP

MONGOLIAN TRADITIONAL FOOD UUTS OR WHOLE RUMP OF A SHEEP. The whole rump of a sheep is boiled/steamed in a big pot along with the other parts, head, and legs. Uut is the most famous dish of the traditional holiday Lunar New Year, traditional parties and festivals. 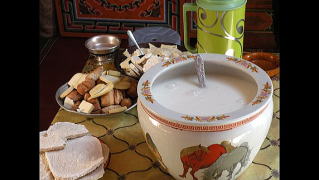 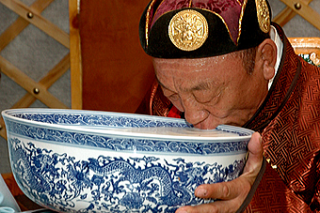 Mongolian Airag is a fermented dairy product traditionally made from mare’s milk. It has a unique and slightly sour flavor with a bite from the mild alcoholic content; serving it is an essential part of Mongolian hospitality. It Airag will be ready after many times of beating the mix of horse milk – the source of airag is reserved for just this in a hohuur (big leather container). Airag requires at least 2000-4000 beats which help it to ferment with air. The culture of fermenting airag in Khukhuur was inscribed on the Representative List of the Intangible Cultural Heritage of Humanity by UNESCO in 2019. In Mongolia, the milking season for horses traditionally runs between mid-June till early October. 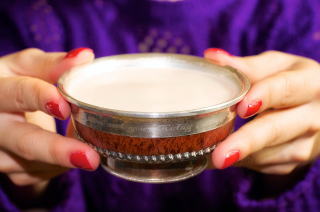 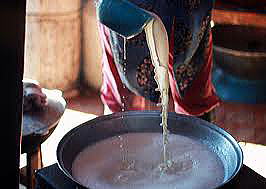 Mongolian Nomad’s hospitality starts from offering milk tea to every visitor. The main ingredients of milk tea are tea (typically from southern China, Georgia, and Sri Lanka), milk, and a little bit of salt. Milk tea is the most commonly consumed beverage in Mongolia and during holidays such as Lunar New Year and Naadam, all families must prepare milk tea to offer guests. 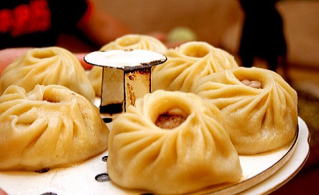 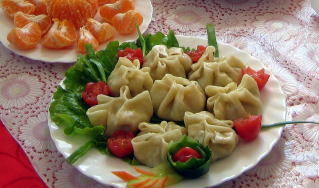 Mongolian Buuz is considered THE traditional food in Mongolia. Mongolian families make buuz for respectful guests or family members on special holidays such as the lunar New Year. During the national Lunar New year holiday, all family relatives visit each other and show respect on the third to fifth days of the holiday. The main ingredients are minced meat (typically beef but sometimes mutton, horse’s meat, goat’s meat can be used), chopped onion, salt, garlic, and other spices (caraway is common). 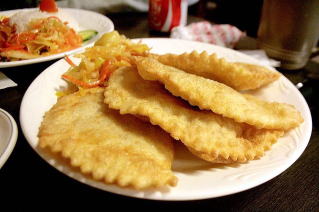 Mongolian Khuushur is a meat pastry or what westerners refer to as meat pockets. Khuushuur is quite common food at most cafés and restaurants across Mongolia. Mongols celebrate the National Naadam Festival in July and August and it’s during the Naadam Festival that the main foods are khuushuur and Mongolian Barbecue that is called Khorkhog. The main ingredients are minced meat, onion, garlic, salt, and spices – though Khuushuur with alpine wild leeks or wild onions is popular in Mongolia. 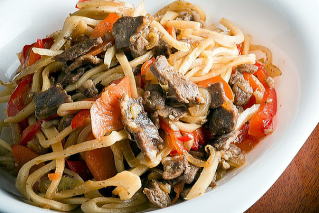 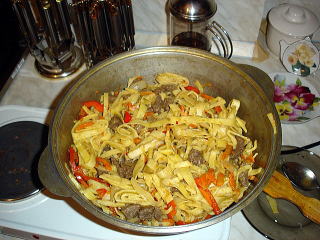 Another common dish you’ll encounter in every Mongolian family household or in the menu of a local restaurant or diner is Tsuivan (Цуйван). It’s a kind of fried mixture of steamed noodles, meat, and vegetables. The Tsuivan is a really easy-to-make dinner, that probably each household prepares several times a month. 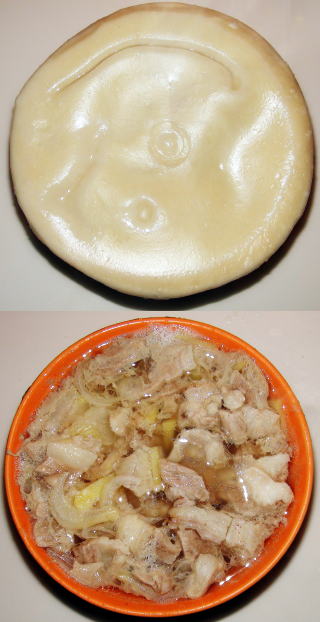 MONGOLIAN TRADITIONAL SOUP BITUU SHUL OR AIR-TIGHTLY COOKED MEAT SOUP. The traditional way of cooking the Bituu Shul is to put the soup ingredients in an animal gut and boil in water or cook on steam. Nowadays, we cook the Bituu Shul by putting the ingredients in a bowl and cooking on steam. The bowl top should be air-tightened by flour. We trust that Bituu Shul helps us gain strength and cure fatigue as all the nutrients can remain in the bowl while cooking. Khorkhog/Mongolian BBQ 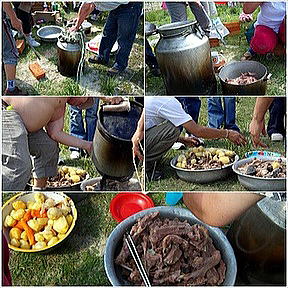 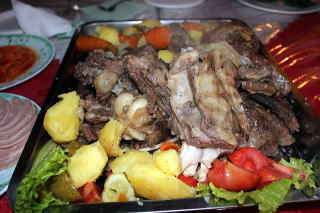 A hearty meal, Khorkhog (Хорхог) consists of big mutton pieces, some vegetables like potatoes & carrots, sometimes steamed Mongolian noodles, and heated river stones. It is a festive and family meal consumed more commonly in the countryside during trips, or during a visit to a family of nomads on the steppes. 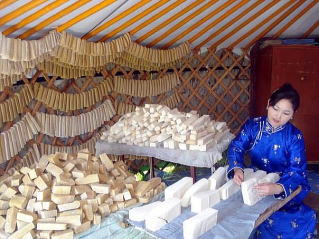 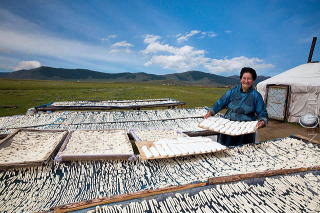 Mongolian “Aaruul” is a dried curd (called aaruul in Mongolian) that is the most widely consumed traditional dairy product in Mongolia. During the summer, nomadic families milk animals (mainly cows, sheep, yaks, and camels) twice a day to make plenty of aaruul and other dairy products to consume year-round. Nomads usually make aaruul from goat and cow’s milk. 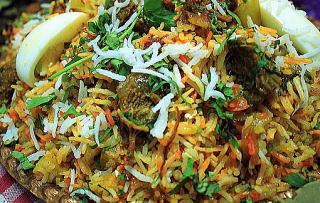 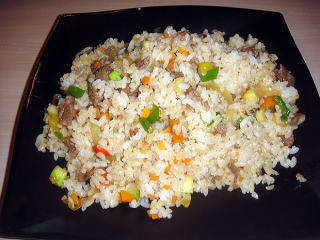 Stew with rice, vegetables, and meat.
To eat Mongolian can sometimes also remind us of China. Since the old times, rice was imported from the southern neighbors, because it obviously doesn't grow in the Mongolian climate. 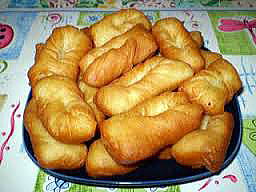 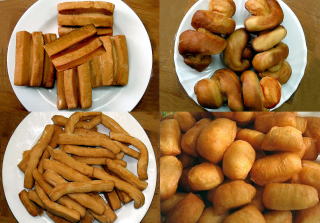 It would seem that this Mongolian pastry is nothing special. In essence, the boortsog is a small, delicious donut that is served as an appetizer for tea.The “right” boortsog is deep-fried until golden brown, using animal fat (although in the modern world it is increasingly being replaced by vegetable oil). They are often sprinkled with powdered sugar or sprinkled with liquid honey. Incredibly tasty, especially with tea. Boortsog can be of various shapes and sizes, especially a lot of this baking is being prepared for the holiday Tsagan Sar. 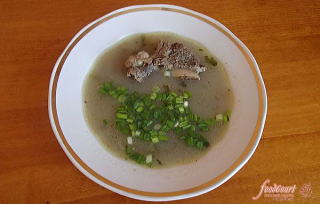 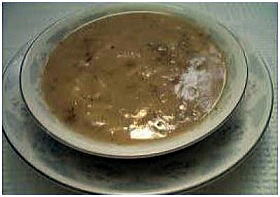 National Mongolian soup with the simplest composition. It is prepared on a strong meat broth from lamb or beef. Additionally, add a little flour and vegetables to make it more satisfying, but not to interrupt the natural taste of meat. Of the spices, only salt and pepper are put in the traditional Mongolian soup. If bantan is made from lamb, sometimes milk is added to the broth to make the dish more tender. In Mongolia, this soup is considered medicinal.

Mongolian Noodle Soup is a hearty soup with meat and noodles that are commonly consumed in the cold months. Most family prepares the bone broth (simmering lamb or beef) and then adds hand-made noodles with chopped onion. Mongolian foods generally don’t rely on a lot of spices and herbs due to the extreme continental climate. But people in central places lately prefer to add some vegetables such as potatoes, carrots, and cabbage to noodle soup.

It’s a slow-cooked meat in a broth, seasoned with onions and salt, then added vegetables and wide noodles. The meat is commonly mutton and beef but can be goat or horse sometimes. After everything is done cooking, the tender meat and the vegetables are put on a platter and served, with the broth in a different bowl. Basically, it’s a deconstructed noodle soup.