The lake was created by a volcanic eruption and is part of the Naiman Nuur Nature Reserve. The largest of these lakes is Lake Sirate. A walking course of 5-10 km will be held around Lake. You can visit nomadic houses around a very beautiful lake surrounded by mountains and forests, observe lifestyles, and go trekking on horseback to experience Mongolian culture, history, and customs.
Naiman Nuur National Park is located in the province of Ovorkhangai, in the Khangai range, and it has the typical landscapes of the Mongolian high mountains with their large forests of larches.

The area of Naiman Nuur, ”Eight lakes”, formed behind the volcanic eruptions that occurred all along the centuries. The park is 2400 metres (1,5 mile) above the sea level. An area of 11.500 hectares has been protected as a National Park since 1992.

The lakes are located about 35 kilometres (22 miles) Southeast Orkhon waterfalls, but the track is impassable. This way is accessible only to hikers and horsemen/women who will enjoy an exceptional nature, whereas the jeeps will have to skirt around the mountains by Bat Ulzii (130 kilometres, 81 miles), or even by the track to Khujirt (260 kilometres, 162 miles) in case of heavy rain.

The eight lakes in question are lakes Shireet, the largest and the most beautiful, Khaliut, Bugat, Khaya, Khuis, Onon, Doroo and Bayan Uul. Two of the smallest lakes are completely dry, and the second largest lake, Khuis Nuur, is 90% dry.

The national park is located in a high mountains area comprising alpine meadows and forests of conifers (Siberian pines and Siberian larches). In the North of the protected area, we can see entire valleys strewn with volcanic stones. The peaks of the mountains are arid.

Once the Kharkhorin was the capital city of the Great Mongol Empire under the name Kharakhorum. In 1220, Chinggis Khaan founded Kharakhorum city on the bank of the Orkhon river (present location of Kharkhorin village) , and the city was developed as the capital city of the Great Mongol Empire during Ogedei Khan’s reign. As the vast empire connected east and west, Kharakhorum was one of the most important cities in the history of world trade holding an intense impact on the Silk Road.
Kharkhorin was the capital city of the Great Mongolian Empire in the thirteenth century. It is located on the right bank of the Orkhon river, 400 km southwest of Ulaanbaatar which is the current capital of Mongolia. All around this stronghold, craftsmen's and traders' quarters and other houses were gradually built, until, by about 1230, the area had taken on the appearance of a town.
The city had a surrounding wall with four stone turtles two of them still exist witnessing centuries’ history and centuries’ ahead. The stone turtles are used to symbolize the longevity and solidarity of the city. The Great Mongol Empire was governed from Kharakhorum city until Khubilai Khan settled the capital in Beijing.
Back in the 13th century, Kharkhorin was constructed as a capital city that attracted traders, dignitaries, and skilled workers from across Asia and even Europe. 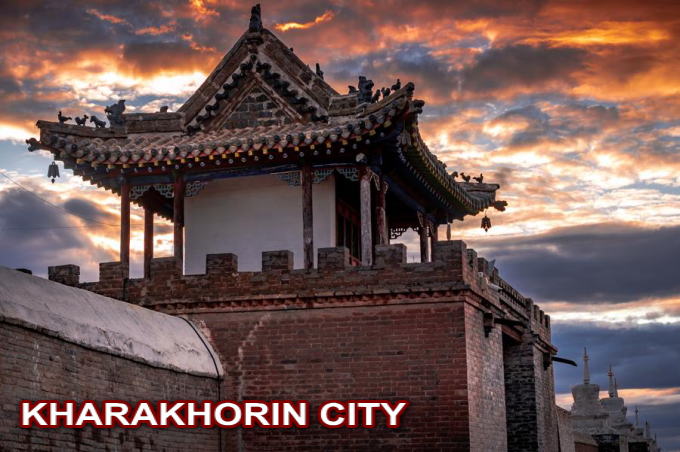 The above process and time may change locally depending on the weather and road congestion on the day. In that case, please be aware of this in advance and follow the instructions of the local staff.
* Meals may change for box lunch or hotel / restaurant / ger.